While the world re-examines its colonial past and condemns the occupation by former empires of vast swaths of distant territory, while supporters of “cancel culture” topple through the sheer force of their voices the statues erected in the names of formerly great men who are great no longer, there is an artistic movement that emerged under French rule which is very much alive and thriving. 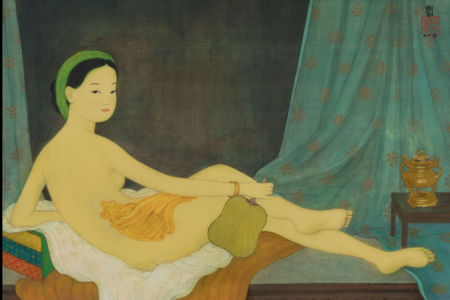 This is Vietnamese modern art, which over the past two years has managed to exceed the symbolic threshold of a million euros.It has a specific history: the creation in 1925 of the École des Beaux-Arts d”Indochine in Hanoi. The historian and academic Caroline Herbelin explains that this school was founded on “a desire to train ‘true artists’ who would, through personal expression, breathe new life into artistic traditions.” So in parallel to an artistic output that was seen as artisanal and linked to the country’s decorative arts, the École des Beaux-Arts was designed to act as a springboard to promote local talents. The mastermind behind the scheme was the painter Victor Tardieu (1870-1937), but what is considered to be the golden age of modern Vietnamese painting stretches, according to art market criteria, beyond his lifetime, up until 1945.

For Joan Yip, an expert at Sotheby’s, the modern Vietnamese school is perfectly accepted within a contemporary context because “it respects local traditions while combining them with western painting techniques.”

Two places for the market 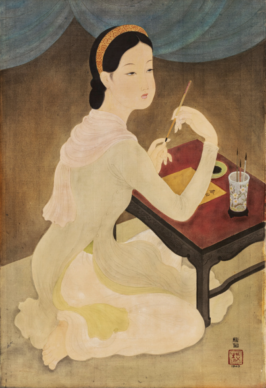 The market for Vietnamese art is primarily active in two places. In France we find Vietnamese art going to auction at Aguttes in Neuilly, at Lynda Trouvé in Paris, who has made Indochinese art her speciality, and now at Sotheby’s, who are presenting an online sale dedicated to “the Golden Age of Vietnamese Modern Art”. The auctioneer Lynda Trouvé, who is planning a sale in September 2021, explains that she sells 90% of the Vietnamese works she presents to Vietnamese buyers. According to her, the French have more limited budgets. “The public health crisis has had no impact on the field. Up until March 2020 the buyers and enthusiasts would make the trip especially from Vietnam to see the artworks. There are around forty artists that fuel demand.” She also explains that in Vietnam the instability of the local currency, the dong, acts as “a barrier to sales in the few auction houses that have been recently created”. 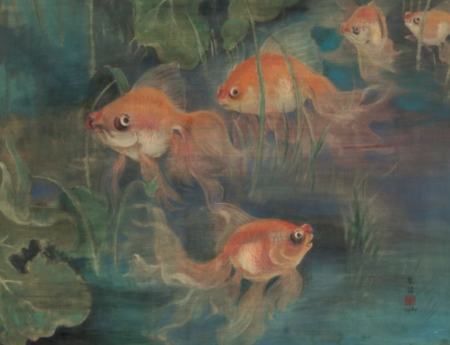 The epicentre for larger transactions remains in Hong Kong, under the hammer at Sotheby’s and Christie’s.

As the Christie’s expert Fiona Braslau explains: “Nowadays, apart from only the wealthiest Vietnamese, it’s the Chinese, Taiwanese and Indonesians who are buying Vietnamese modern art.” But it is in Paris where we find more artworks brought back from Vietnam by colonizers, acquired on the occasion of the colonial exhibition of 1931, or purchased from certain artists who lived in France.

This is the case for the two artists leading the pack in terms of value in this field: Mai Trung Thu (1906-1980), more commonly known as Mai Thu, and Le Pho (1907-2001). However, there is a cruel lack of substantial museum exhibitions to relay the importance of this hybrid artistic output. The preferred themes of these two artists are primarily graceful women and scenes from everyday life. In Hong Kong on 18 April 2021, Sotheby’s sold a large portrait of a woman on canvas from 1930 by Mai Thu for the record price of 2.6 million euros. It belonged to a former French model, the wife of the antiques dealer Pierre Dumonteil, Dothi Dumonteil. The canvas had been featured in the colonial exhibition from 1931. From the same collection, there is an ink work on silk also by this artist dating from 1943, made in a more traditional style and depicting a young woman writing a poem, which was auctioned on the same day for 537,000 euros. Up until that point the highest prices for Mai Thu were close to 300,000 euros. 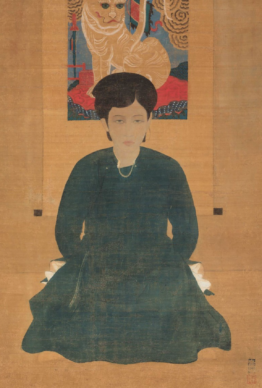 Mai Thu arrived in Paris in 1937 accompanied by his friend and fellow artist Le Pho. They both stayed there until their deaths.

Le Pho also made the art market news recently with the sale at Sotheby’s in Paris on 13 March 2021 of the collection belonging to his son, the recently deceased illustrator Pierre Le Tan (See here the report about Pierre Le Tan auction). A stunning “Autoportrait dans la forêt” (Self-portrait in the forest) from 1930 was auctioned for 883,700 euros. The highest price ever recorded for Le Pho, 1,241,000 euros, was attained at Christie’s in Hong Kong in 2019 for a remarkable large female nude dating from 1931. Up until 2014 the value of the painter, for the most precious paintings, stood at around 500,000 euros.

“For about two years the market has been exploding,” explains Fiona Braslau.

She cites the 2019 sale of an ensemble amassed over 20 years by the San Diego-based Vietnamese-American collector Tuan Pham, who reconnected with his country of origin through modern painting. The record for Le Pho came from this collection, which brought in a total of 6.08 million dollars, plus 4 further world records for a total of 32 lots.

It should be said that the Vietnamese modern art sector is very receptive to recognized provenance, since it has been particularly affected by fakes.