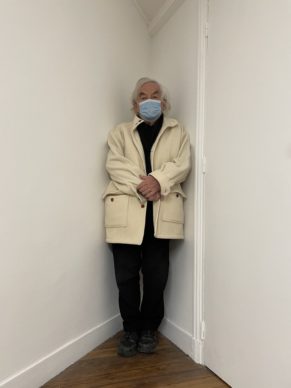 Yet time and time again he has proved willing to constantly reinvent his art, like at his masterful exhibition that filled the whole of the Centre Pompidou in 2002, when he transformed the entire Guggenheim in New York into a shrine in 2005, and when he poetically covered Frank Gehry’s glass sails at the Fondation Louis Vuitton in 2017 (See the report about it). Because these days he doesn’t only play with stripes, always in the same format, but also and above all he plays with light, volume, colour, reflections, geometric shapes, and water in the creation of his large immersive spaces. The artist says that he always works “in situ”, repurposing his art for each different space. 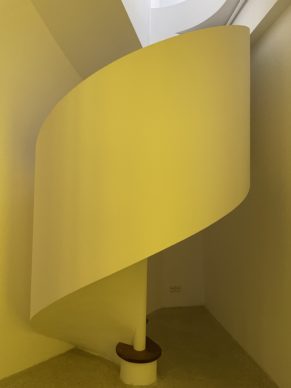 In Paris we can immerse ourselves in his world for a few months. This time he has created a remarkable installation in dialogue with another French art star, Philippe Parreno (born in 1964), situated at the new Kamel Mennour gallery, who initiated this collaboration. This is a museum-scale display which is free to enter. Philippe Parreno, who has been the subject of exhibitions at the Musée d’art moderne de la ville de Paris, the Centre Pompidou, the Beyeler Foundation, and who occupied the Turbine Hall at the Tate Modern in 2017 (See the report about the exhibition), is a hybrid artist who uses new technologies and cinema extensively to tell intimate stories. 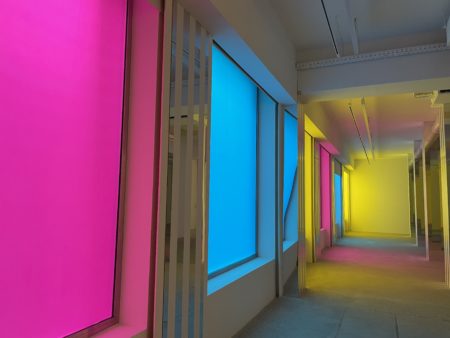 With Roger Pailhas in Marseille

“We agreed to play a kind of game. But it’s difficult to work as a pair,” says Daniel Buren. “I remember how similarly, in 1988, I collaborated with the American artists Michael Ascher and John Knight at the request of the Marseille gallerist Roger Pailhas. The result, since the rule was that each of us would act without knowing about the others’ projects, was the transformation, at my request, of the gallery space into an extension of the bar next door. Ascher had done an in-depth study, placed on a shelf in the gallery, of the relationship between drugs from the ‘French Connection’ trade route and Los Angeles, and Knight had made a fake tourist poster about Marseille which was hanging in the café-gallery extension where tables were laid out (with sections marked out in black and white stripes) and chairs. It was a crazy project. I saw visitors coming to the gallery and not understanding what was going on.

They played a game

This time, to get the ball rolling, I decided to create a fake piece of architecture inside the Kamel Mennour gallery. There were three pillars already in there. I installed 25 in staggered rows.” Each one is covered in mirrors marked on some sides with characteristic white lines. And the windows are coated in brightly coloured filters that plunge the atmosphere into variations of ambient technicolour. 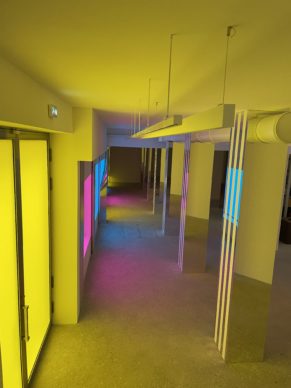 Exhibition as a breath work

Parreno had the idea of bringing the window blinds to life, shutting out the light from outside. He says: “All exhibition work is breath work.” This breathing is punctuated by the rhythm of the light effects. He placed motion sensors in the nearby Seine which use the movement of the water to determine the rising and falling of the blinds. 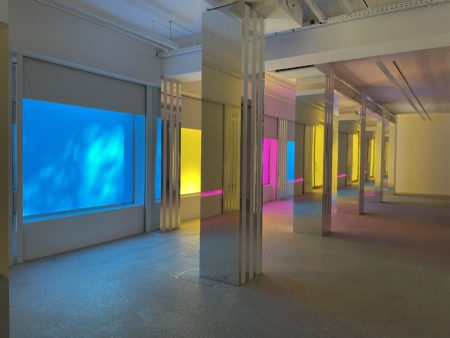 This lively and labyrinthine ensemble is bathed in a kind of magic that the visitor surrenders to. “You can’t take in the space with a single glance, you have to go on a journey,” observes Philippe Parreno.

Without giving away too many spoilers, we can say that the wall of water, which blurs the vision at the far end of the space, adds to the dreamlike atmosphere of the display. This abstract and shifting sculpture produces a sensory experience across 350m2. 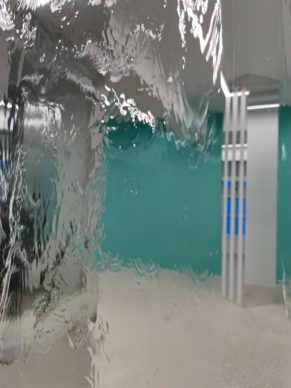 The installation is on view for several months.