Works that no longer exist

It’s a paradox: the first major exhibition to reopen in Paris addresses, fittingly, the subject of works that no longer exist. But what a pleasure to rediscover art without it being filtered through a screen! To gain access as a visitor you have to book online and wear a mask. Everything else is organised for you, including an audio guide that can be downloaded onto your phone. 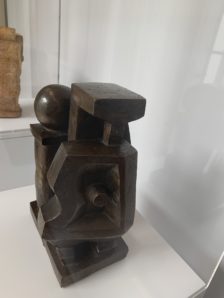 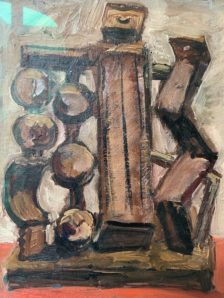 The Giacometti Institute, a small museum based in a wonderful former interior design studio near Montparnasse Cemetery, reveals how early on in the career of the great sculptor Alberto Giacometti (1901-1966) (see other reports about the Giacometti Institute here and here), at a time when he was expressing himself in a surrealist spirit and was as yet unknown, around fifty of his works disappeared as a result of the artist’s own negligence or dissatisfaction… This happened between 1920 and 1930. “Despite his sudden and definite break in 1935 with the group led by André Breton, Giacometti continued to agree for his surrealist works to be exhibited and presented as such, including after the war,” explains the curator of the exhibition Michèle Kieffer in the catalogue, which is also written in English. “Legend has it that Giacometti, haunted by dissatisfaction, destroyed his works as he was making them (…) But the voluntary destruction was in reality, rarely the only explanation for their loss.”

The show’s great achievement lies in managing to convey a true impression of Alberto’s rich and relatively unknown surrealist period, using various methods. They’ve been able to do so because the Swiss sculptor who lived in Paris often had his work photographed by friends who were big names in the field, such as Brassai, Man Ray and Henri Cartier-Bresson. The foundation has 3,000 photos in its possession. But Giacometti also made many drawings before he embarked on his three-dimensional works. The foundation has more than 100 of his notebooks covered in sketches. But the director of the foundation Catherine Grenier has taken this even further. 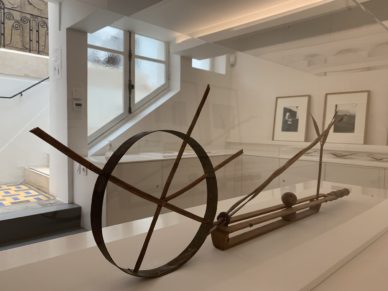 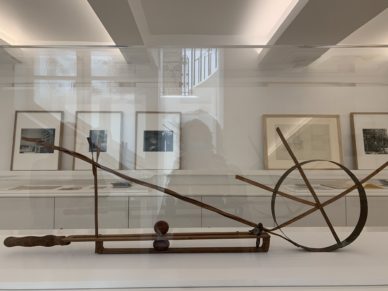 The boldest display in the exhibition is “Objet surrealiste” (Surrealist Object) from 1932, a mechanical structure made from wood and metal, which has been completed recently by the French artist Martial Raysse. It’s a machine made to be set in motion, yet it remains static. Giacometti may well have taken a totally different direction at the time. 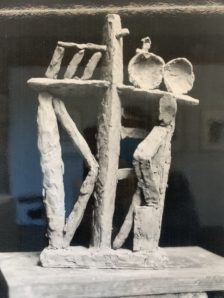 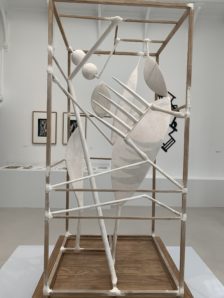 Thanks to their extensive archive material, the foundation have also been able to reconstruct “La cage” (The Cage) from 1930-32, depicting huge geometric shapes that seem to be engaged in a battle, enclosed within the frame of a hollowed-out cube. This work clearly foreshadows the “Cages” of Louise Bourgeois. Giacometti worked in series. So alongside sketches and photographs there are artworks in the same spirit as his late 1920s compositions, featuring agglomerations of sinuous silhouettes and circles or cubes. 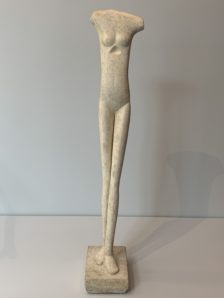 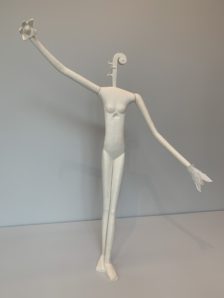 In 1936 he produced an extraordinary “Femme qui marche dans l’atelier” (Walking Woman in the Studio), an elongated figure in plaster resembling a sculpture by Zadkine, whose hands have been replaced by feathers. “For a few days now, when it’s not too cold, I’ve been staying in my studio to work on plastering. Perhaps a new woman will come out of it,” he wrote to André Breton in 1934. Another astonishing piece is a bronze relief work from 1929 reconstructed in resin, depicting two silhouettes of cubist-style figures copulating. Alberto Giacometti was a great sculptor even before 1941, when he started developing his emaciated silhouettes. “A la recherche des oeuvres disparues” (In Search of Lost Works) is a testament to this.

Message in a bottle 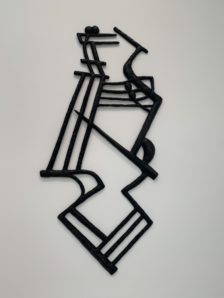 It’s also a message in a bottle tossed in the sea in an attempt to rediscover his surrealist sculptures, lost at a time when the artist had yet to achieve the renown he enjoys today.