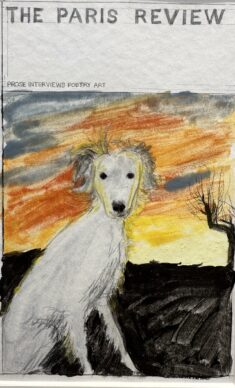 It’s the question on everyone’s lips: with the arrival of the contemporary art fair Paris+ by Art Basel, which is now organized by the Swiss behemoth, what are the real changes? Expectations are high if we are to believe the mass of collector and professionals, particularly Americans, who are making the trip specially to attend the event, which opened on 19 October at the Grand Palais Ephémère. The temporary structure located opposite the École Militaire, designed by architect Jean-Michel Wilmotte, is hosting 160 exhibitors until 23 October. This is a relatively modest size for a fair with a global reach.

If we take into account the smallness of the site replacing the Grand Palais, with the fact that the new organization was only set up nine months ago, plus the need to preserve this operation’s relatively French character (61 exhibitors are from France), this year we do not see any apparent revolution. As the director of the fair Clément Delépine explains, “for the time being there is a certain continuity. The difference lies in the selection of international galleries.” 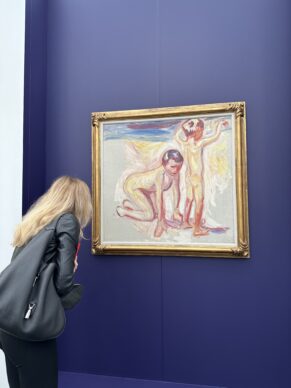 Marc Spiegler, the global head of Art Basel, predicts: “we will have to wait until 2024 with the return to the Grand Palais to see the true new formula of Paris+.” We can imagine the organizers of the event will establish close partnerships with the French private art foundations (Fondation Louis Vuitton, Collection Pinault, Fondation Cartier…) but also with the luxury brands associated with them.

Meanwhile, what is truly striking about this inaugural edition is the ambition of the participants. This is illustrated through the programming of the exhibitions at galleries across the city. This year it’s the Kamel Mennour gallery, with curator Jérôme Sans overseeing the exhibition taking place outside in the Place Vendôme. It is occupied by the Polish artist who lives in Berlin, Alicja Kwade (born in 1979), who has already been the subject of several international exhibitions such as in 2019 on the roof of the Metropolitan Museum in New York. 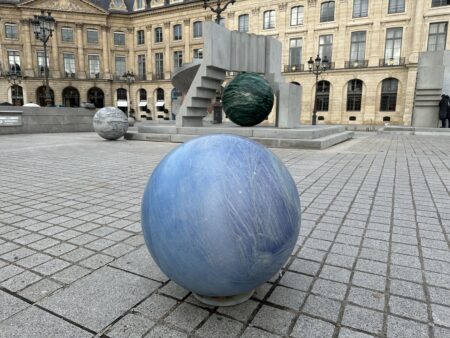 In Paris, until 14 November, we can see an impressive array of stone sculptures composed of spheres that can weigh up to 20 tonnes, which she has installed in dialogue with prefabricated staircases. “The site is challenging in itself. I’ve arranged spheres that tie in with the history of the place built on the orders of Louis XIV, who liked to present himself as a planetary leader. But the stairs don’t lead anywhere. I like the idea that passers-by can appropriate the installations and play with what might resemble planets.” The works are on sale in groups for around 800,000 euros.

Likewise, especially for Paris+, the Petit Palais is hosting an exhibition until 8 January dedicated to an artist who has enjoyed great commercial success, Ugo Rondinone (born in 1964). This Swiss artist who lives in New York presented an ensemble of small-scale paintings of stylized sunsets at the Frieze London fair, which sold abundantly for around 45,000 dollars at the booth of Sadie Coles, although they look like they could be mistaken in their form and format for landscape paintings by the recently deceased poet and painter Etel Adnan (1925-2021). But at the Petit Palais there is an exceptional video installation by Rondinone that is being exhibited for the first time, which seems to mark a successful turning point in his creation. It is composed, in appearance, of a wooden cylinder standing 10 metres tall. 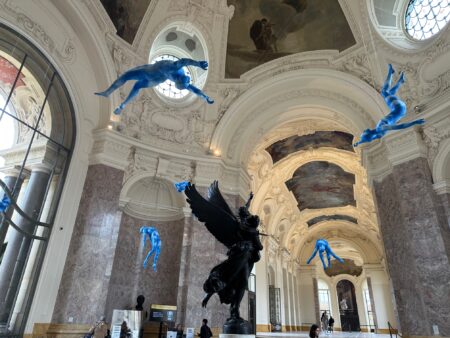 Inside, “Burn to Shine” projects into an immersive atmosphere simultaneously across six large screens a piece of choreography by Fouad Boussouf filmed by firelight at night in the Moroccan desert. The trance that consumes the dancers is hypnotic. (The ensemble is on sale for 450,000 euros). You can only watch it directly on YouTube as the stupid algorithmic censorship has decided this dance is not allowed to be watched by under 18s. 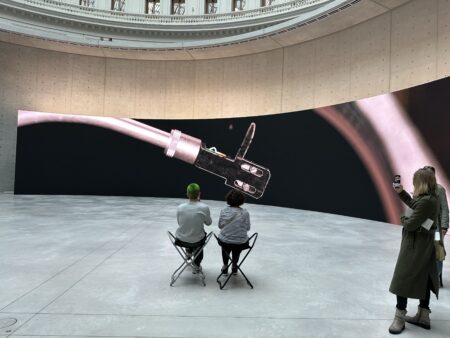 A number of galleries are copying Paris’s very rich current museum scene. Marian Goodman, for example, is presenting pastel works at her booth at Paris+ that are linked to “Time No Longer”, the extraordinary video installation in the nave of the Bourse de Commerce by Franco-Albanian artist Anri Sala (born in 1974) (on sale for between 10,000 and 20,000 euros). 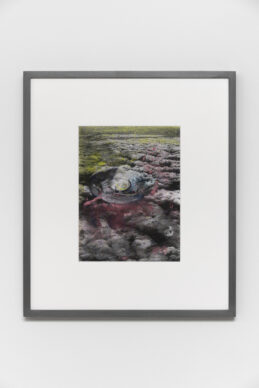 One of the star exhibitions of the Parisian season is the dialogue, at the Fondation Louis Vuitton, between the impressionist painter Claude Monet in his later years and the abstract impressionist Joan Mitchell (See the report here). The multinational Zwirner gallery is showcasing at their booth a canvas by Joan Mitchell from 1989 entitled “Border” (sold for 4.5 million dollars on the first day). 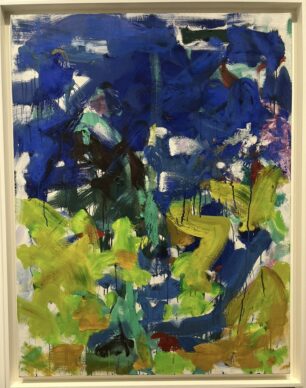 While the Musée d’Orsay is exhibiting Edvard Munch, Jérôme Poggi’s gallery is presenting three rare paintings by the genius of Norwegian art that come from a private collection from the same country. “Two Boys on the Beach” is presented at the booth of the gallerist at Paris+ (on sale for 2.4 million euros) (See here the report about the Munch museum opened recently in Oslo). 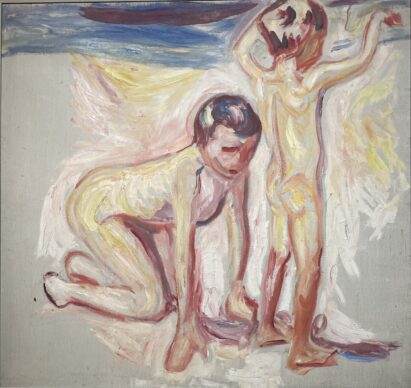 Victoria Miro from London is exhibiting a female portrait painted in 1962 by the New Yorker Alice Neel (on sale for 1.5 million dollars) at the same time as the Centre Pompidou is currently programming a retrospective on this extraordinarily liberated woman. 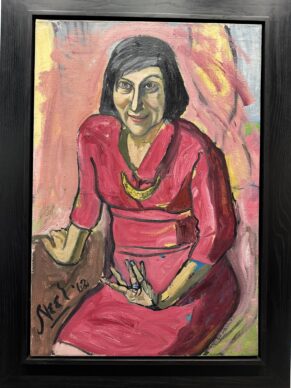 With Brexit, even though – as we discussed last week (see the report here) – the London art market is still not showing signs of weakness, the Parisian competition is growing more powerful as a new major platform in the European contemporary market. New galleries are opening up premises in the French capital and are naturally present collectively at Paris+, such as the Israeli Dvir in the Marais, the Peter Kilchmann gallery from Zurich, and also the legendary Berlin-based Esther Schipper at the Place Vendôme upstairs.

The latter is exhibiting the French artist Etienne Chambaud (born in 1980) who is making, among other things, enigmatic sculptures mixing luxurious frames of orthodox icons and white forms that look like cysts printed in 3D (on sale for around 15,000 euros). An exhibition is currently dedicated to him at the LAM museum in Lille. 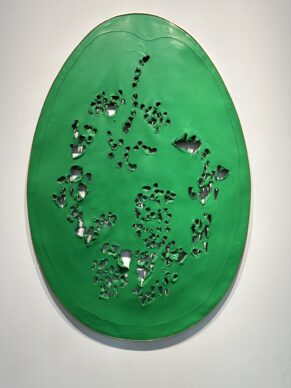 In 2023 there is also a branch opening in Paris, in the 8th arrondissement across 800m2, from the global art market behemoth Hauser & Wirth. Meanwhile, at their booth at Paris+ the gallery has foregrounded a historic painting by the Italian conceptual artist Lucio Fontana (1899-1966). Taken from the mythical series “La fine di dio”, which features 36 artworks made between 1963 and 1964, it is characterized, like all of them, by a large oval form (1.7 metres tall), which is lacerated and monochrome. The egg shape embodies renewal and the title itself indicates the end of a world. This green version from 1963 is on sale for 25 million dollars.

An other Fine di dio 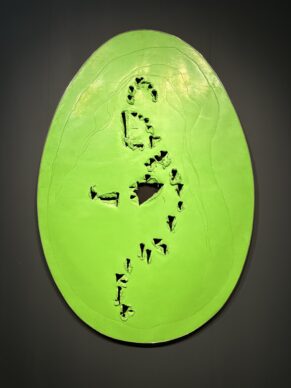 At their booth the Franco-Italian dealer Tornabuoni is exhibition another version of “La fine di dio” in fluorescent green, presented for around 30 million euros. The founder of the gallery, Michele Casamonti, explains that the difference in price can be explained in concrete terms: “the painting was made earlier and the shades of green are different.” Now the Parisian contemporary art fair is the stage for a battle of the giants of the market, the likes of which we are not used to seeing up until now.

The Acquavella gallery from New York, which is behind numerous prestigious collections across the Atlantic, decided this year, rather than taking part in Frieze, to join the ranks of the new participants at Paris+. At their booth we can see a painting by Francis Bacon depicting a ghostly portrait of a man on a two-tone background, depicting the painter’s final partner, John Edwards. Bill Acquavella, the founder of the gallery, explains that it was while visiting the exhibition “Bacon en toutes lettres” at the Centre Pompidou in 2019 that he understood the importance of the late works by Bacon, when the Irish painter was seduced by a more abstract style (on sale for around 22 million dollars). 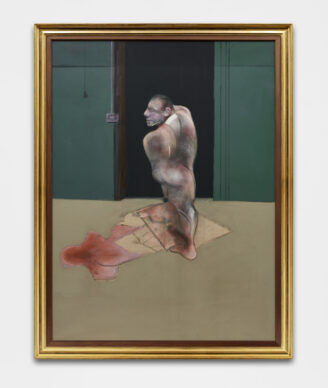 A Matisse for 45M

It is also at Acquavella where we can admire a young woman who is languorously stretched out, her upper half exposed, on a blood-red sofa. “Nu au châle vert”, made in large format (88.6×116.3cm) in 1921-1922 by Henri Matisse, is quite possibly the most expensive painting at the fair: 45 million dollars. Paris+ is just as worth visiting as a museum. 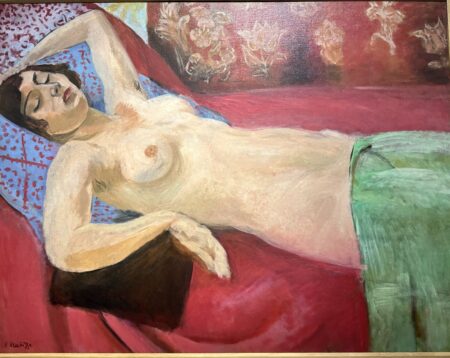