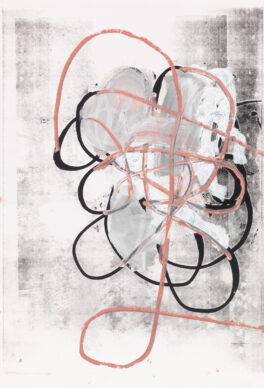 On 2 June 2022 Brussels will see the opening at the new and third space restored by the Xavier Hufkens gallery, over 2500m2, of an exhibition of one of the legends of American art from the late 20th century, Christopher Wool (born in 1965). For the past five years the artist known for working with the concept of the image and repetition in painting hasn’t exhibited his new work. 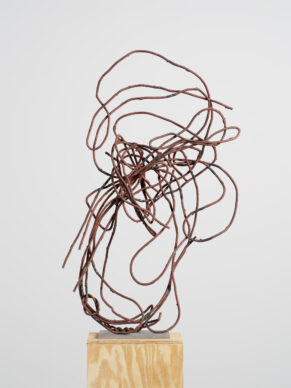 To unveil it he has therefore chosen to collaborate for the first time with Xavier Hufkens. We can imagine that the canvases will be on sale for over a million euros. At auction, the man whom the Artprice database describes as “one of the most sought after contemporary artists in contemporary art”, saw one of his works from 1990, marked with large letters spelling out R I O T, sold in 2015 for 26.8 million euros. 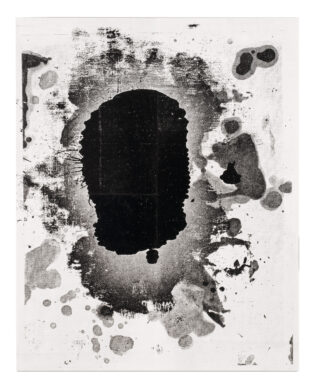 From an artistic point of view as well as a market-based perspective, his arrival in Brussels is therefore an event. In the European capital Xavier Hufkens is probably the leading gallery in terms of sheer volume of business. Concerning the opening of his third space here, rather than branching out internationally, he explains: “I have reflected for a long time on the decision to confine myself to Brussels. Many galleries have decided to set up premises where there is money, from London to Palm Beach. Personally, I prefer to be able to attend all of the openings at my gallery. I love my city.”

This week he is inaugurating an exhibition dedicated to the young American artist originally from Mozambique Cassi Namoda (born in 1988). Bright colours, scenes from daily life (on sale for between 20,000 and 50,000 euros). She paints what she calls in the title of her exhibition “Tropical depression”. Among the most beautiful compositions, there’s a black virgin with child. “I’m not Catholic but painting is a spiritual practice,” explains the woman whose paintings feature in the permanent collections at the Perez Museum in Miami and the Baltimore art museum.

This week the Art Brussels fair is also running  to 1 May at the Tour & Taxis site. Here the gallerist is staging a one man show of the drawings of another American star, the Californian known for his mockery of the American “entertainment” system, Paul McCarthy (born in 1945) (See here an interview of Paul McCarthy). They are on sale from 50,000 euros. 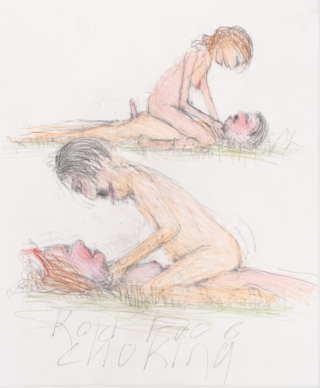 Art Brussels, which hasn’t taken place since 2019, this year presents 157 galleries from 26 countries. According to Nele Verharen, who’s in charge of the fair’s relationship with galleries: “Our Franco-Belgian community has worked hard over the pandemic. The collectors have stayed very active.” 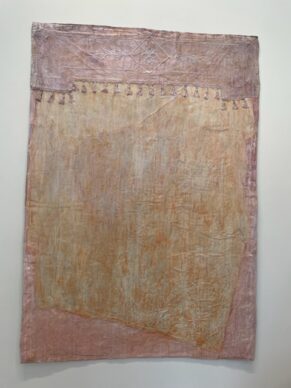 It’s worth saying that the European capital presents a particular profile in terms of contemporary art. The amateur type here is often well informed and likes to buy the most cutting-edge avant-garde. However, as Carolyn Drake explains, director of the Belgian branch of the Mendes-Wood gallery, “the sales operate here for lower prices than in the megacities like New York, with a limit of 100,000 euros on average.”

The Brazilian Mendes-Wood, who has not finished expanding, will also be opening premises on 6 May in New York in the Tribeca area. Meanwhile, in Belgium, this week she is unveiling the work of Swiss artist Heidi Bucher (1926-1993) who is the subject these days of institutional exhibitions, among others at the Haus der Kunst in Munich and at the Kunstmuseum in Berne (until 7 August 2022.  https://www.kunstmuseumbern.ch/). Obsessed with the idea of memory, of fabricating traces of places from her personal life, she has invented a technique of moulding in large format on a base made of gauze, latex and glue, daubed with mother-of-pearl. Wardrobes, doors and even the parquet flooring of the family home or an asylum are moulded from this second skin, or “skinnings” as she calls them. The works, some of which are presented at Art Brussels, are on sale for between 15,000 and 500,000 Swiss francs.

The Dvir gallery from Tel-Aviv, which also opened a branch three weeks ago in Paris on the Rue des Arquebusiers in the Marais district, has a space in Brussels not far from the Gare du Midi. At Art Brussels they are represented at an exhibition by the curator Sam Steverlynck on the artists of the Venice Biennale 2022, with Latifa Echakhch (born in 1974) who this year is occupying the Swiss pavilion. In Brussels, her installations consist of a screen transformed into a painted canvas and is on sale for 60,000 euros. 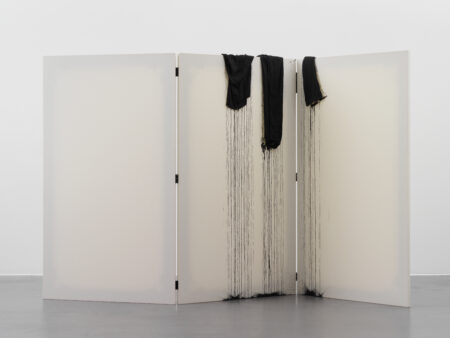 The gallery exhibition that is currently the most stunning in Brussels has been conceived by the prominent French artist Neil Beloufa (born in 1985) at the very large space belonging to Clearing, at a former shutter factory. Across 2500m2, the artist who has already been the subject of exhibitions at Moma in New York, at the Palais de Tokyo (See the reports here and here), at the Venice Biennale and recently at the Hangar Bicocca in Milan, has untethered his imagination. In this new kind of exhibition where the visitor pays 10 euros to enter, we interact with machines which talk and ramble, we buy NFTs (0.55 Ethereum each) to walk through the mind of the artist hypnotized by the internet.

Whistling before the end of the world

Beloufa has created some objects for sale in the form of bas-reliefs that address digital dangers. At Art Brussels, for example, one of his compositions, made out of a patchwork of wood and leather, depicts a figure looking at a computer. The work is also marked with a barcode which triggers an animation. It’s entitled:“Whistling before the end of the world” (on sale for 50,000 euros). Despite his pessimistic tone, Neil Beloufa is opening the doors wide to the future in art.

We should point out in Brussels at the Wiels art centre the exceptional exhibition dedicated to the Lebanese artist Huguette Caland (1931-2019). A style of painting that is firstly post-pointillist then more pared-back, which plays with the interactions between colours, of immense beauty. 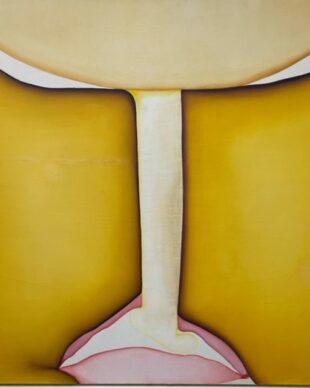